The asymmetry of love

When I realized that I already wrote nearly 70 articles under GG-Art18, I deliberately reserved this topic for the 74th article and now is the time to publish it.

The asymmetry, an approximating equality

I started with this work at the beginning of the millennium, I think in the year 2003/2004, and unfortunately, I could not finish it in the mathematical style that I originally intended. I received the impulse for this work during a math lecture at the University of Karlsruhe, as well as many other good impulses and thoughts. Unfortunately, most of the thoughts have not been written down, but one can still find some elements in my articles on my both websites. This was the phase, actually, the phase had begun at the same time as my studies has begun, where I wanted to design and develop an artificial intelligence or software that write my thoughts down digitally. This is a kind of Brain-To-Computer (B2C) interface, attention this not a B2B – Brain-To-Brain connection. This was also the phase where I wished the day should have been more than 24 hours, then I could have absorbed all the knowledge in me. 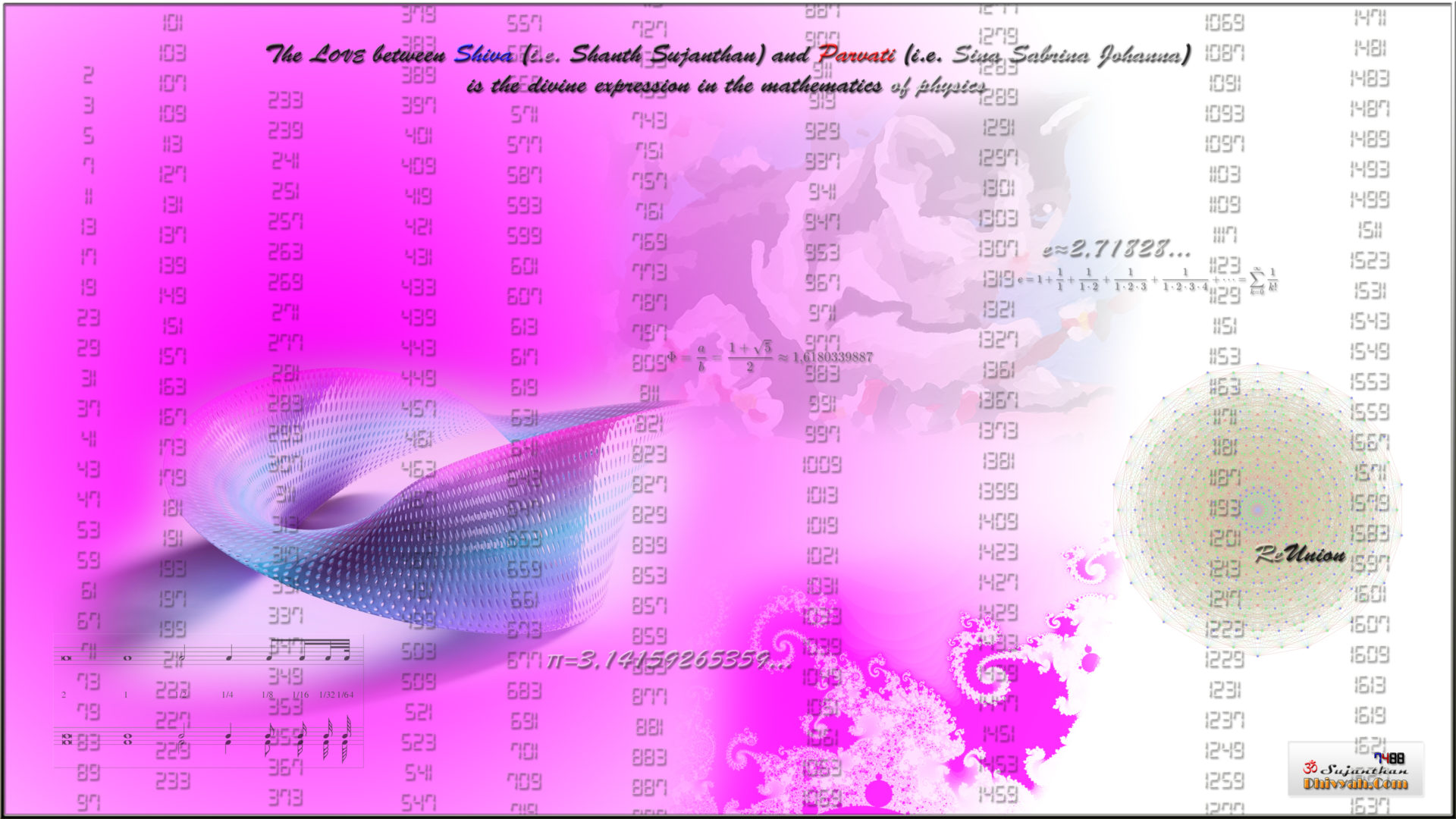 The Love between Shiva (i.e. Shanth Sujanthan) and Parvati (i.e. Sina Sabrina Johanna) is the divine expression in the mathematics (of physics)

One or the other will wonder why the language of mathematics is for the description of love, where poetry is the language of love. Poetry inspires or breathes life into one, but mathematics is the language of rationality. The formal math and the natural language are like the heart and the mind. I also realized that attempts have been made to mathematically formulate the aesthetics too. Only through computer science I did get to know the natural language better. This was due to the fact that I wanted to understand why a linguist like Noam Chomsky plays a major role in the computer science, so I started to deal with linguistic too.

The explanatory models of biologists, psychologists and or medical scientist who stigmatize love as a kind of evolutionary behavior have disturbed me tremendously. Although the explanatory models were of course rational and not emotional, the model had more of a cold. This was because it was not balanced or complete. The language of science should be objective and neutral, that is not to say in reverse that it should be lifeless and cold.

Now to the actual topic and what core idea stands behind it:

In order to understand the asymmetry of love at all, one must first understand the word asymmetry. In mathematics, a relation is called asymmetric if it never holds x < y and y < x. Only this allows an order. I consciously use this definition to show later the balance through the inequality. This is how one can understand the love between woman and man (or also the love between fellow human beings) and under which laws they exist. My considerations showed that a symmetrical love relationship must never exist. Suppose that evolution has created a symmetrical relationship, then both relationship must get the same weighting, and a random joining of the sexes would have a very low probability value for the survival. The human needs a right and a left arm, two right or two left arms are counterproductive or disturbing. Second, if nature merges symmetrical components, an improvement would not be possible. Only by merging different non-symmetric properties it can come to a selection that allows survival.

Nature always tries by mutations, mathematically this is a permutation of the various traits that produce a better living entity based on its karma. This does not always succeed in the nature, because this has to do with the karma of the Atman. Therefore, the mutations also produces offspring that are not capable of survival or are not worthy – based on the current situation.

Formulated in a simple way and extended to the happiness of a marriage life, the wording would be as follows:

The partner must be the complement of oneself and at the same time there are elements that need to be symmetrical for a happy marriage. This asymmetry is not only helpful to oneself, but also to the lineal descendants. From this unconscious reflection the popular thought came, at least I know this from my own culture, that the female descendant should be similar to the father and the male descendant of to the mother. The indispensability of the previous sentence or condition would arise if the inheritance of a dominant trait to the lineal descendants leads to disharmony in the bond. Inheritable properties take shape through asymmetric education or, in the case of destructive education, they become silent. This mathematical characteristic is also the cornerstone of why man becomes an individual and each should be educated individually. An equality, as it is unfortunately expected of society with false ideas, can never exist. This crossed image of the (Tamil) culture also has other advantages. This allows a better connection of the two same sexes, i.e. the father with the son or the mother with the daughter in a functioning family. The bond should also be circular during the different stages of development of the child so that the inherited properties can be brought to a high degree quantitatively and qualitatively. Only by these two characteristics (qualitatively and quantitatively) a maximum is possible.

This law, which I use as a basis for my thesis, can be found in all other disciplines too, not only in natural sciences, but also, in the financial world. Instability is another level of representation of asymmetry. It is the prerequisite for the existence of the universe. The instability arises from the asymmetry.

If one considers the physics and the philosophy as the spouses of a marriage, i.e. the mother and the father of all other disciplines, then mathematics is the marriage bond that binds them together. This is also an abstraction form.