For reasons of clarity I have waived redundancy. The tabular accumulation of important data can only be found on Dhivyah.Com.

These data are not based on Hindu sources, but on my visions of the past. Unfortunately, I do not know if the term Vision is correct here.

The data as well as the content may even differ from the Hindu sources.

The Ramayanam took place in the Treta Yuga. Since the Kali-Yuga has started, 5117 years are passed “officially” at the present time/year in 2016. Before the Kali-Yuga has started the Dwapara-Yuga was where also the Mahabharata and the battle to Kurukshetra took place at the end of it. The Mahabharata was 47 million years ago and the Ramayana is much further back – 59 million years ago. If you go 47 million years back, you will soon find out that in this period was also the last Ice Age. Immediately just before the Ice Age was the so-called ground zero – humanity got a new chance after the Ice Age.

The end of the Kali-Yuga is initiated with the purification process. Everyone should be aware of the time span. The battle for Kurukshetra is factually proven and also that of Ramayanam.

Rama was the seventh of ten1 incarnations Vishnus (≡ Shiva ≡ Murughan ≡ Vinayaghar ≡ …). There are many millions of names in hinduism as well as in other languages, cultures and religions for the same divinity. The one group say: Shiva/Vishnu/…, the others Allah and the next one say our father…

Many ask themselves if there should be a God. Why there is so much suffering in this world. The answer to this question is given by Hinduism as follows: The karma determines everything – as I have already written in my post: “The Upanishads, a meeting with death?” The only thing man takes from this world and brings back into a new life (rebirth) is his karma. Karma creates the path of life, the character, etc. It can also be called destiny. In english the word destiny actually suggests that everything is predetermined in life. This is not 100% correct. It only forms the framework which we are largely indebted to ourselves. Of course there are things in life that are not the result of our own karma, they are machinations of others.

These downgrades of the four Yugas (world-ages) are caused through these complex conditions and also by cowardice, stupidity etc. of each individuals paired with knowledge excavation. Through the (thousands of) years the whole thing is raised to where we are now at the Kali-Yuga.

Kali2 in the word Kali-Yuga has not to do with Paarvathy ≡ Seetha ≡ Kaali ≡ Dhurcca ≡ Prakriti3 ≡ … The better half of Shiva!

The Ramayanam which currently airs on Star Vjay TV seems to be that it is based on the book by Prof. G. B. Kanuga – “Immortal Love of Rama”. The serial is a good addition to the literature.

The Ramayanam with Seetha and Raman took place east of Germany and north of Jaffna-Sandilipay (Sri Lanka/Ceylon) where I was born.

The Germans as well as the Europeans are descendants of Ravana (Ramayana), not to be confused with my avatar / incarnation Rama from the (Ramayana). Ravana was a very great Shiva Bhakta until his arrogance blinded him, so that he did not recognize me as the highest instance in my incarnation as Rama. His arrogance even went so far as to consider himself Almighty. It will be seen that in ancient history before Ground-Zero to the current history after Ground-Zero, there were many powerful personalities who believed themselves to be Almighty, or who were made to believe that they were Almighty e.g. Hitler.

Since in the last reunion (fourth attempt was in the Ramayana), humanity has made many mistakes and much has gone wrong, and also thereafter, see Mahabharata till Ground Zero, where my Beauty has no longer incarnate after Ramayana. The current incarnation of us both in the Kali-Yuga is the last attempt or chance for the mankind, which is necessary for the persistence of the Universe. If this goes awry and the course sometimes looks like it, then it will be the end for everyone and everything.

It was a great fault to separate me from my Beauty in spite of the first phase was suddenly stopped in 2012. Nevertheless, reunion in 2012 would have opened new doors for all, even though at that time (2012), I didn’t recognized or identified myself as the highest authority or my Beauty as my better half.

Ramayana is also one of the reasons why I have incarnated as a Sri Lankan Tamil and my Beauty “Sina Sabrina Johanna Kaiser” as a German Catholic, not just to break the curse that was over Sri Lanka. This curse has been spoken for decades, even the civil war in Sri Lanka, which went over several decades, had been associated at that time. I already know these stories from my childhood.

Hinduism is monotheistic and not polytheistic, as may be assumed by many ignoramuses.

On the one hand by my many forms and appearances in different ages and on the other by the blindness of certain people is the erroneous belief originated that Hinduism is polytheistic.

1 Of the ten incarnations of me, only eight including the current incarnation (Kalki-Avatar) are correct. The remaining two were incorrectly assigned to me. These two special Atman as well as the other special Atman are reborn to stabilize order in the world until I personally incarnate. The Kalki-Avatar is the last incarnation of me (for the current universe). The symbolism of the horse of the Kalki-Avatar: it stands for horsepower. This is the unofficial unit, the official is kilowatt, with which one specifies power (of cars). As I have already stated in my article “philosophy” in Figure 1, the automobile is my passion. With the (German) automobile industry as a supporting pillar, everything began officially in the year 2010, but my suffering through the direct attack of the Devils began shortly after my military service period in the year 2000. At that time, I was 22 years old.

2 The official reasoning does not confirm with my vision, that is with the (hidden) divine message. When I incarnate, Kaali (Parvathy, Sina this is one of her names in the current incarnation) will also be present / incarnate in the Kali Yuga as well.

3 See reference in my post: “You are single, but in body you are dual”

Here I will successively publish the love messages. The link is a PermaLink, i.e. it does not change.

For release or update date, see in the folder of this link. There are not only videos published, also matching lyrics (for the videos) with translations and so more. 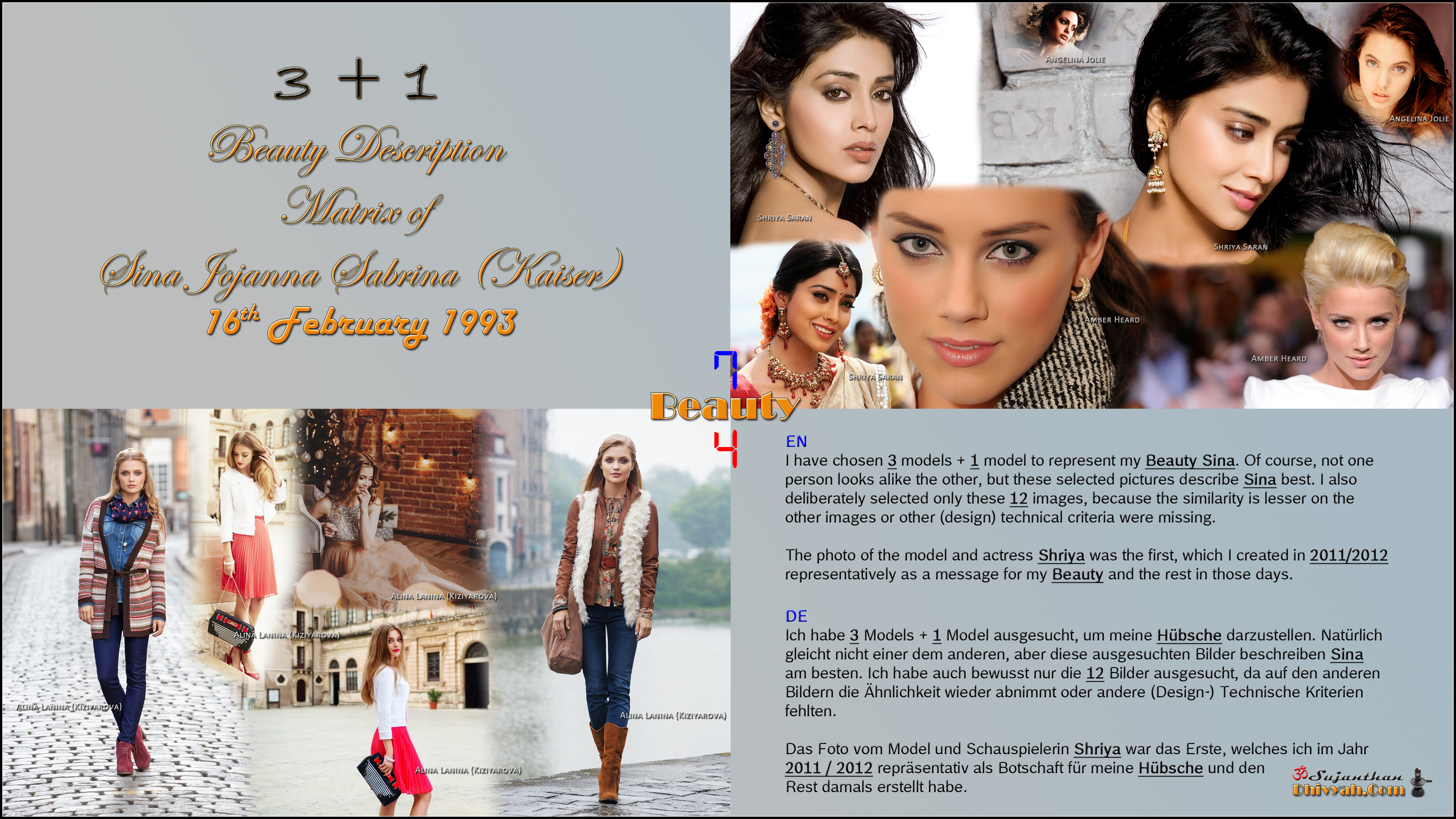 We have reached the end of our project. Soon a new era begins.

The below listed files and videos with subtitles (The dissolving: MaBeauty74 / BluRay Disc Project / 4MA74 PreView) were combined on a Blu-ray Disc, which can be played on any conventional Blu-ray Player. The files on the Blu-ray Disc in the DATA folder can only be executed and displayed on a PC.

Get to the Point

Background information about this song

In order to understand this song/poem better and to interpret it correctly, you need the following background information.

This poem is supposed to put Hemanathar, a famous singer/poet and cultured person of his time, on the ground of facts. His arrogance and overestimation of his own makes him blind. He asks everyone to a duel/battle.

His demands are as follows: If he wins then the competing singer/poet/educated and the entire country from the competing singer comes to him at his feet. If he loses he will submit.
Then the king of Madurai who is aware of this call his best people to stand again Hemanathar. Since they heard this everyone fled/escaped from Hemanathar. The King ordered a Shiva bhakta named Banabathirar, who is educated but does not show up like the others to stand up against Hemanathar. Banabattar worship to Lord Shiva, who appears as a woodchopper in Madhurai and one night he sing this song in front of the house of Hemanathar so that he can hear this song …

→ All above Links in this Box:
[Permanent link – for update date, see file]