The magic number also has many other meanings. This compound expression from the words “magic” and “number” have their own meaning in the different disciplines.

My Microsoft Windows Program “Number Sasthiram“, which I programmed as an introduction for you and can also be found on my main page “Dhivyah.Com” under “Downloads → My Tools → Microsoft Windows Tools and Scripts“, was intended for you, to bring you with the subject into contact without discouraging the others, i.e. the scientists. 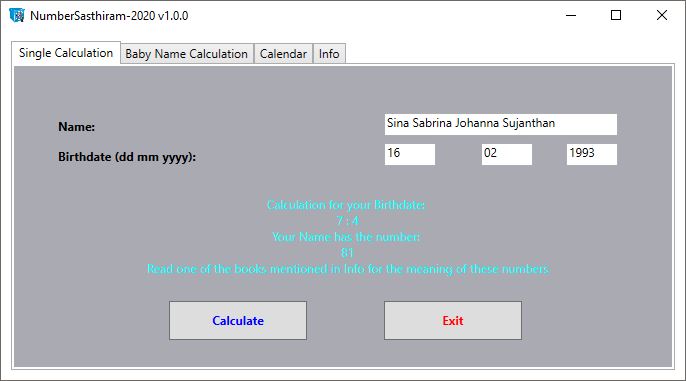 When I became aware that I am the highest authority (in all three times: that is the past, present and future), I had to do a few things – including some assumptions (hypotheses) that I myself as a scientist or scientifically thinking person, not really let the things come closer to me, actually due to a lack of proper understanding and scientific reference, but completely rethought, e.g. black magic, that’s black Yajurveda.

My name Sujanthan, which my grandfather on my father’s side – doctor in the 6th generation, which is also Brahma, gave me, was based on the theories of numerology, e.g. from Dr. R. I. Dhuraimurugar and Pandit Sethuraman.

My grandpa read a lot – with that I mean really boxes of lot – my mother told me that she always borrowed the books from him.

He adapted my name, also in the English spelling, so that the initial of my father’s name with my name results in the cross sum of 5, because it fits best to my birth value 8:8.

According to a name, Hindu astrology says that it has a great impact on a person’s fate.

My name “Sujanthan” with my initial “A.” for “Anandakumar”, this is my father’s name, has the value 32, which is described with an anecdote from King Vikramaadhithan, who must always descend the 32 steps to his throne.

It is said, this is what my mother told me as a small child, that if he listens to others than to his inner being – the divine – then he always stumbled and did not make it to the throne. Right now, I can’t completely reproduce the story – I also had a vision in 2016, I think – this is also related to a spirit called “Vethalam”, which plays also a central role in the story of the king.

According to my vision, the Vethalam (வேதாளம்) in this story represents the B2B subnet of evil, and whenever one listen to evil, one always fall back into this network, just as the king never reaches the throne – because the Vethalam always set certain conditions and the king always fell for the trick questions …

In the children’s animated films, the inner impulses are mostly depicted as angels and devils, perhaps the would-be adults can remember this.

The angel represents the good (impulse) or the divine (impulse), the devils represents the evil (impulse or external impulse), which always wants to lead you into ruin by whispering in your ear.